Posted by Donna Tate on 5/1/2016 to Facilitator Recommendations 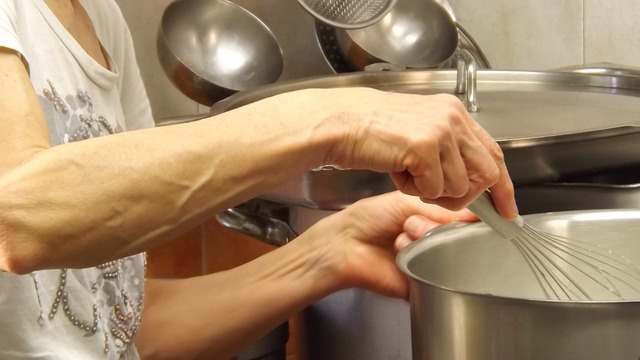 In an a flutter of too many things to do, at home, stuck with lots of chores - a re-frame began to present itself.  We had entertained the night before, and the kitchen was in need of attention.  Lots of pots and pans, lots of leftovers - do we just throw it all out?  Simple leftovers, like rice water, green beans, and "what was that again?".

Mustering up the drive to tackle kitchen duty, it soon began to feel more like accomplishment rather than a chore.  Beginning the scrubbing with pots and pans, to get the worst done first - there was the rice water.  Was it still good to eat after a night in stainless steel?  It did have a lid on it.  Hmmmm...what was the name of that drink of I had seen on the Mexican Restaurant Menu?  Horchata?  Rice water was the base.  And in the instant of a creative moment the following recipe took shape:

Bring rice water to a boil stirring to make sure rice bits don't stick.  Add remaining ingredients and return to boil for 2 minutes.  Color of liquid is lightly coffee (cinnamon) colored, and it occurred to me that it might be good with coffee!  Allow to cool slightly, drink warm.  (I later discovered that real Horchata is many times run through the blender, in a real finesse of a touch, but remember the goal was to clean the kitchen not make more to clean)

It was delicious, if I do say so!  Resembling hot cocoa!  The answer to the question on food quality:  yes, the rice water was still good after sitting for 12 hours in a covered stainless steel pot.  Perhaps you will not want to try this in your own home, as it does come with a tiny personal risk.  However, at my house - it's half the fun!  Testing for taste, the nose also helps in making decisions as to food quality.  In any case, creativity is born of play outside of the bounds of rules.  So says, Sparks of Genius:

What we do for fun rewards us many times over in unexpected ways when we apply it to some real-world problem or use it as an analogy for some mysterious phenomenon."  The difficulty with playing  - is being able to remain enough of a child to do it.  Play returns us to the pre-symbolic drives of gut feelings, emotions, intuition, and fun from which creative insights stem, thereby making us inventors. When rule-bound work does not yield the insights or results we want to achieve, when conventional thought, behavior, and disciplinary knowledge become barriers to our goals, play provides a fun and risk-free means of seeing things from a fresh perspective, learning without constraint, exploring without fear.  Play transforms knowledge and builds understanding as we create our own worlds, personas, games, rules, toys, and puzzles - and through them, new sciences and new arts."

James Augustine Aloysius Joyce was an Irish novelist and poet, and regarded as one of the most influential and important authors of the twentieth century (1881-1941) once said, "A man of genius makes no mistakes; his errors are volitional and are the portals of discovery." Who are we to argue with a man who has two middle names, one of which is Aloysius?!  (pronounced Al u ish us) "It's that name that made him strong!" (Lyrics from, A Boy Named Sue) Ahem, where were we, now?

Niels Bohr (1885-1962) Danish physicist and philosopher, awarded the 1922 Nobel Prize in Physics for his work on quantum theory - developed his own model of the atom in which he proposed electron traits that are still considered valid today. He founded the Institute of Theoretical Physics at the University of Copenhagen (now known as the Niels Bohr Institute) to promote scientific research.  This expert in the fields of physics, helped us to see that achievement is invariably and innately tied to failure.  Says he:  "An expert is a person who has found out by his own painful experience all the mistakes that one can make in a very narrow field."

When we engage in playfulness and creativity, failure and mistakes are barely noticed.  Of course, we learn from mistakes, in powerful ways that often do not require repetition.  What is it that is said about "Experience being a good teacher?"  So let us by all means, eat the fruitage of creativity and play, and not be bound by rules - at least occasionally, and especially when sorely needed results are not forthcoming by conventional means.  The highest level of learning is invariably and inextricably tied to failure and mistakes.

The Appreciative Facilitator
Your Price: $35.00
In Stock Free Shipping.